HAVE YOU FORGOTTEN GOD’S ZEALOUS COMMITMENT TO YOU?… 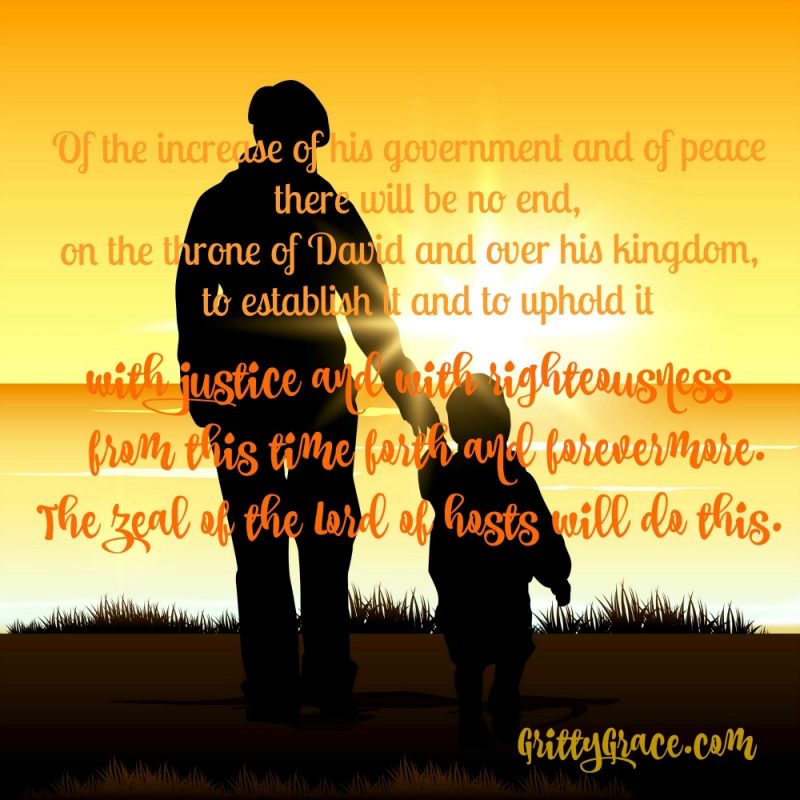 Do you ever feel that when you go to your worship service on Sunday, you are going as someone who is all beat up and bruised, waiting to find comfort, healing and energizing for another week? I often do. This past Sunday, I found it in spades! And no, that doesn’t ignore ministering to people around me. It’s not either/or, it’s both/and.

We think of the prayers, GOD’s Word being read aloud, music being sung and confession of sin as ministering in various ways to our souls…and they do! Even the offering is part of our worship as we give a portion of what GOD has given us back to GOD. But there is a special part of the service that ministers in another way and that is the sermon. As the pastor preaches GOD’s Word to us, it changes him as he prepares to preach it and us as we hear it. It’s not just some exercise in oratory. It is one way GOD speaks to us…a very Biblical way!

This past Sunday was pure gold! It was the end of a series that has been on the names of Jesus in Isaiah 9:1-7.  I won’t try to summarize the sermon. It won’t help you or me. I’ll just tell you the parts that were helpful to me after they were sifted through my brain and heart. If Will Spink ever sees it and doesn’t recognize his thoughts, you’ll understand why. I hope he will see a few of his ideas here. To hear the actual sermon, click here and go to December 27, 2015.

Surprisingly, the focus was on the last line…at least that is where my attention was captured!

For to us a child is born,
to us a son is given;
and the government shall be upon his shoulder,
and his name shall be called
Wonderful Counselor, Mighty God,
Everlasting Father, Prince of Peace.
Of the increase of his government and of peace
there will be no end,
on the throne of David and over his kingdom,
to establish it and to uphold it
with justice and with righteousness
from this time forth and forevermore.
The zeal of the Lord of hosts will do this.

Now for a bit of history

But I have to back up a bit. When we talk about zeal, so often, we talk about the need for us to have more of it. I suppose that is true. But the point both in this passage and being made yesterday, was how zealous GOD has been for this promise to be fulfilled! Will said this word carries the idea of a jealous lover (in the good sense) who expects love and adoration only for himself from the one he adores and is committed to.

When GOD first started making a promise that Someone would come to redeem us, it was shortly after the Fall, when mankind was lost because of Adam and Eve and their sin. Sin and brokenness entered the world and it was no longer the perfect place GOD created it to be. What was once effortless, became difficult, often agonizing…whether it was growing plants or relationships. Nothing was easy ever again!

Over the course of history, GOD chose a people through whom He would bring the Redeemer. Time after time, they disobeyed Him. Because of His promise to them, He had to punish them in various ways, eventually having them carried off from their land to foreign lands…because they would not worship only Him! He was jealous that way. He was the GOD that created them, who brought them from Egypt to the Promised Land and fed them all the way. He gave them victory over their enemies in that Land…but they continued to worship other gods. He was not going to tolerate their spiritual adultery!

At times, He sent prophets to them with warnings and words of hope. Some listened. But then, there was silence. For about 400 years. Not a word. For any who held out hope for Messiah, their hope must have been flickering. Until Bethlehem! But even then, no one expected a baby…at all. So despite the angels, a couple of decades went by without much activity until Jesus began his adult ministry.

The idea that GOD is still zealously working to bring about a kingdom of justice and righteousness is stunning! Click To Tweet

But GOD was zealously working to keep His covenant promise!

The point of this passage however, is that GOD was working all the time. He was zealously working to keep the covenant promises He had made with His people who no longer include simply the Jewish people! These days, the idea that GOD is working to bring about a kingdom of justice and righteousness is stunning!

He is zealously working to keep the covenant promises He has made with His people. Click To Tweet

It is not something He really needs our help with. Maybe cooperation is more like it. It is something He has been working toward since before creation! Since before mankind sinned, He already had a battle plan in place. This zealous GOD was working to make a plan to bring about righteousness for His people (which He did on the cross). As a result of our being reconciled with GOD, we can be reconciled with each other!

The point of this passage, the sermon and my blog is this: not that I need more zeal per se. The point is that GOD has all the zeal needed to keep His promise to me made in this Isaiah passage. Not only that, He has the power to do it. On the days when my faith sags, when my strength is not there and I am weak, He is strong! He is zealously working to keep the covenant He has made. He will get the job done.

GOD’s commitment to you and me is a zealous one. It is not nonchalant!

It is the power of love moving the Lord to make His peoples’ cause His own and the passionate commitment of His nature to fulfill His purposes for them. -Alec Motyer

God is not going to leave you waiting for His covenant promises to happen. He will move heaven and earth to rescue His people.

GOD will come with no light or slow arm to redeem His church for He will be all on flame with amazing love of believers and anxiety about their salvation! -John Calvin

Do you share GOD’s zealous commitment for His world? Are you praying for it? Working toward it? Prioritizing in that direction?

Do you trust His zealous commitment mentioned here in Isaiah 9:7? Do you realize that this work rests on His mighty shoulders, not yours?

What then shall we say to these things?
If God is for us, who can be against us?
He who did not spare his own Son but gave him up for us all,
how will he not also with him graciously give us all things?
Romans 8:31-32

The really good ideas you find in this post are from Will Spink…honestly. It was a powerful, encouraging sermon! It turned me on my ear. I was challenged and found hope in new ways as a result of it. I didn’t try to plagiarize, I just passed on what I found to be helpful…but the ideas are His and from the Bible. Be encouraged as I was!